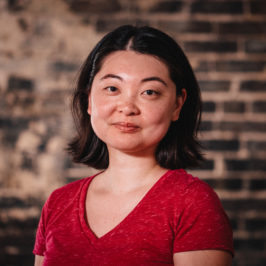 Joi Tribble, the Sidewalk Shorts Program Director, will be celebrating her twelfth year as part of the Sidewalk Film Festival team in 2018, along with the Festival’s 20th anniversary. The Birmingham native and Samford University graduate, who is already hard at work screening short film submissions with her colleagues, shared her insights on the selection process and Sidewalk’s role in the community with Create Birmingham this week.

I’ve worked in some capacity with Sidewalk since 2007. For the first six years, I volunteered as a screener. Five years ago, Rachel Morgan (our current creative director and film programmer) asked me to consider becoming a programmer for the short film program. Over the eleven years I’ve been with Sidewalk, the quality of the submissions only continues to grow. Rachel and Kyle McKinnon did an amazing job building a reputation for Sidewalk’s programming as both diverse and high quality, and I hope that we are only continuing and improving on what they started with the short films. Sidewalk as a festival has also gotten bigger and showier. It’s always been about the filmmaker community and showing off good film to a local audience, but over the last decade, it has shown how it can help create and bring together a community of filmmakers, film fans, and just people who believe that the arts are important.

Sidewalk also has the privilege of bringing important content to a larger audience when it comes to things like social issues and civil rights. Over the years, as we’ve included this kind of content, it seems like the audiences are coming to want to see more films with these kinds of important discussions in them. Related to that, I’ve also seen how Sidewalk is helping to change the perception of Birmingham as a city. A couple of years ago, we had a filmmaker from New York whose short film we accepted. He attended the festival. Afterwards, he admitted that he had been trepidatious about coming to Birmingham because of a perception that it was still the city of the 1950s and 1960s. At the urging of some of his filmmaker friends, he chose to attend. After attending, he said that not only were the city and the people welcoming and friendly but that he would come back to Birmingham anytime and that he was wrong in his original opinion of Birmingham. That kind of change in perception is critical to Birmingham growing as a city on the national level, and I think it’s amazing that Sidewalk can have a small part in making that change.

What keeps you coming back to short films?

While I love watching a great feature-length film, short films allow me to explore a larger variety of film content and execution. Many filmmakers start with making a short film and that genre is one of the best places to find emerging and future talent. Plus, filmmakers are more likely to take some risks and try new things in short films. I see a huge variety of topics and techniques in short film that might take years to show up in a traditional feature-length film. With literally thousands of short films being created and posted online each year, it’s almost impossible to watch them all or pick the truly quality and innovative ones. So I think the curation of these films at film festivals is critical in helping the everyday moviegoer identify the ones worth watching. I fully appreciate what our feature programmers go through in selecting their films, but I love doing shorts programming and wouldn’t trade off with them for anything right now.

What sets Sidewalk apart from other film festivals?

Sidewalk actively fosters and encourages a community during our Festival. While we’re definitely here to showcase amazing film – and we do that well – we’re also here to connect filmmakers with other filmmakers and film enthusiasts. In doing so, we’ve become well-known for our amazing parties that manage to be both extravaganzas and intimate settings. Unlike many other festivals where the venues are scattered miles apart or where films are screened in cineplexes, we have a concentrated footprint of beautiful venues like The Alabama Theatre, The Lyric, and (when it’s not under renovation) The Carver Theater, to name a few. That concentration helps add to the energy of the festival.

The screening of shorts begins months before the festival. How many people are involved? Can you walk us through that process?

We have a team of about 35 screeners who help us watch and report on all our short film submissions — which, by the way, include not just narratives and documentaries but also episodic content, animated films, teen and family films, and music videos. (There are separate groups of screeners who handle our feature films, SHOUT content, and screenplay submissions.) These screeners are a cross-section of our community that includes men and women from both within and outside of the traditional film and media industry. I also have two new programmers this year — Kiwi Lanier for fiction shorts and Lauren Jacobs for nonfiction shorts — who are helping make final selections.

Process-wise, we begin accepting submissions in November. Then, from December until May, the team of screeners watch all the submissions and provide us with reports on the films. For short films, every film is watched by at least three separate screeners. The averages of these report scores and comments provided with the reports help Kiwi, Lauren, and myself whittle down the many hundreds of submissions we get into a smaller pile. Additionally, Kiwi, Lauren, and I watch all local or Alabama-related films for ourselves. From there, the real fun begins. All of the remaining films are high quality and probably worthy of being shared with our audience. Making final selections for the festival becomes a fine balancing act of variety of content and genre with the relatively few minutes of programming we have during the all-too-short festival weekend. The programmers spend hours exchanging emails and text messages or talking in person to identify the right mix of films for our audience.

Do you have a rubric for a great short film when you are screening? What do you look for?

This is always such a difficult question! There are a lot of factors that we look for. The most obvious and most easily measured things are the technical elements — how well is it made? Does it look good on the screen? How’s the sound? Are the acting and script strong? How are the lighting and editing? Once we get past those questions, then you get into the slightly more subjective elements. Is the film original in content and/or presentation? Is it thought-provoking? Does it present a concept or idea that people should be made aware of? Over the last decade, I have watched literally thousands of films, so sometimes it’s easy to get jaded or cynical. When I can’t stop thinking about a film, or when I want to rewatch it (despite the hundreds of other films I always have in the queue), that’s always a good sign. The films that generally stick with me are ones that propose a challenging issue or question in a unique fashion or that are so beautifully shot that you lose yourself in the film world itself.

There are a couple of things that tend to stand out as “strikes” against a film for me. Perhaps the quickest thing that can lower a film’s overall quality for me is sound. You can have an amazing film, but if the dialogue is so soft or hollow that I can’t understand it or if the sound is so out of balance that I go from straining to hear to being blasted by environmental sounds, I immediately get turned off to a film. With short films, the key word is “short.” Does your film justify its length? There’s an all-too-common habit now of making 30+ minute short films. Do you really need that length, or do you need to edit excess? And finally, related to the length of a film, while you certainly want to recognize all the important people in your film and production, if your film is fifteen minutes long, don’t have three minutes of credits.

I’m personally a huge science fiction and animation fan, so I’m also always on the lookout for a few high quality, thought-provoking sci-fi films and interesting animation films to include. In 2017, we launched an animation jury award, so I have a lot more freedom (and programming minutes) to program some amazing animation now.

Can you paint us a picture of the behind-the-scenes of shorts programming? What’s something people typically don’t know?

There’s a lot of snacks and late nights involved, that’s for sure. I’ve heard people complain that we don’t really watch all the films we get. I’d like to reiterate to those folks that we really do. We spend hundreds of hours watching short films. There’s a lot of discussion behind the scenes of balancing a variety of genre, content, and theme. While folks may intellectually know that we have a limited number of programming minutes, the reality of how hard it is to make selections is probably twice as hard as they imagine. For example, in 2017, we had around 9,500 minutes of short film submitted — that’s 158 hours of film. We could only program about 22.5 hours of that over the course of the festival weekend. While 22 hours of film sounds like a lot, it isn’t when you consider the amount submitted. In 2018, at the halfway point of our submission season in February, we already have over 9,900 minutes of film submitted, so those final selections are only going to get harder. That said, I’m excited to see so much quality film being produced, so I’m not complaining!

What advice do you have for those looking to get involved with Sidewalk?

Volunteer! Sidewalk is a non-profit organization, so we rely on the support of both community company partners and individuals who donate their time to help us make the festival (and year-round events) happen. If you want to meet local filmmakers and get involved with the filmmaking community, join us for year-round events, like our monthly Salons. If you just like watching quality film and having good discussions, attend our monthly documentary screenings. Make sure to check our website or Facebook page for some exciting news in the next few months about the independent cinema that we will be opening downtown.